Life is a canvas, Art is my imprint

Is the ethos artist Jason O’Brien lives by and it describes his commitment to leaving his mark in life with works of art that deliver messages of inspiration indelibly leaving his imprint on anyone who views it. Jason is Canadian born artist living in Toronto who is fascinated by telling a story without words and capturing the imagination of his viewers by exploring soulful, introspective themes of the human condition that celebrate love, spirituality, vulnerability, connectedness and the awesome resiliency of the human spirit. His work draws from Black-Afrocentric culture, literature, music, fashion and pop-culture translated through heroic subjects artfully presented to communicate his concepts. His work is produced using vibrant rich acrylic paints and mixed media on large canvas and he recently started to incorporate the power of digital tools to help enhance and produce his emotionally stunning works.

Jason’s work resides in many private collections around North America and over the past 20 years has been showcased publicly at local art auctions, gallery exhibitions, charity fundraisers around Toronto. His most popular painting “Rainbow” was recently featured on the book cover of acclaimed author Deidre Berry's “The Next Best Thing”(Amazon/Kindle) and most notably on the critically acclaimed dramatic TV series “Queen Sugar” - Season 1 (2016) produced by Oprah Winfrey and Ava DuVernay (OWN Network). Through his work he Jason invites viewers on a journey to examine his interpretations of what he believes make us “Beautifully Human” and it is his hope in his work you will see pieces of yourself reflected back. 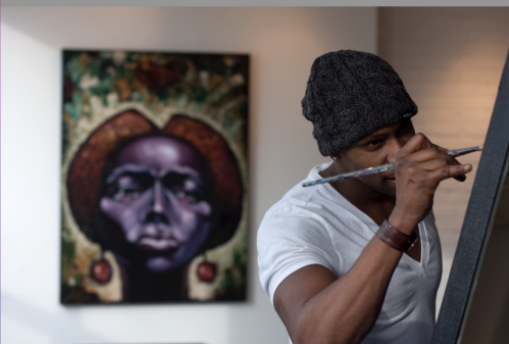 Sept 2016 - QUEEN SUGAR (TV Series) - “Rainbow” and “Black Cotton” have been featured on the set of the popular hit TV drama series Queen Sugar produced by Oprah Winfrey and Ava DeVernay. Since its appearance on television they have risen to great popularity and are sought after by art lovers everywhere to add to their collection.